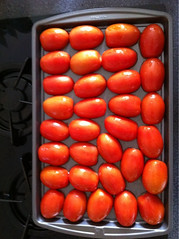 We tried a modified version of our Harvest Time Roasted Tomato and Sweet Corn Soup recipe tonight – suggested by our friends at Bogle Vineyards and a recipe they sent out in their latest newsletter. Truth be told – we’re suckers for roasted tomato soup!

Essentially it’s the same as our original recipe – except after doing the puree at the end, we added about 8 oz of Trader Joe’s Super Sweet Frozen Corn kernels in lieu of any fresh corn (no longer available) along with 4 oz of crumbled TJ’s Blue Cheese and about 6 oz of Niman Ranch Uncured Maple Bacon chopped into bacon bits. Add a dollop of Creme Fraiche into each bowl after serving – and you’re good to go! Yum!

At lunch out yesterday at Mike’s Cafe in Portola Valley, the special soup was roasted tomato and corn – and it was really lovely. While it’s not exactly a soup day here today (temps heading into the 90’s), it’s the perfect time for both tomatoes and sweet corn so I decided to give this a whirl. It turns out magnificently – if I do say so myself! Total time to prepare – about an hour and 15 minutes.

Sunday’s are Farmers Market day in Menlo Park so I headed out first thing to pick up the ingredients – basically 3 pounds of tomatoes (mostly San Marizano’s but some yellow plum and others mixed in) and 3 ears of fresh sweet corn. I stopped by Trader Joe’s to pickup a 28 oz can of plum tomatoes – we had everything else at home. The core recipe was inspired by one of the Barefoot Contessa’s.

Read on for ingredients and directions!

Last weekend we picked up some fresh peppers at the local Farmers Market and made Elise’s Peperonata recipe. Delicious and highly recommended!

My son and family stopped by this afternoon following today’s Sunset Celebration Weekend and we did just what we did last year – grilled a couple of tri-tips on our Weber charcoal BBQ. Turns out, we did just about the same thing last year! With the unusually wet and cool spring we’ve had in northern California this year, today was literally the first time we pulled the cover off the Weber to grill something!

I picked up two plain tri-tips earlier today from Bianchini’s Market in Portola Valley. The first we seasoned with Tom Douglas’ All Purpose Smoky Barbeque Rub – picked up this morning from Tom’s booth at the Sunset event. The second we seasoned with rock salt – with a healthy dose of fresh ground Penzey’s Special Extra Bold™ Black Peppercorns on both. We seasoned the tri-tips about 5 hours before we started grilling and put them back in the ‘frig.

Like last year, I used Lazzari Mesquite Charcoal – which burns hotter than briquets, cooks to tri-tips faster and adds a very nice charcoal cooked flavor to the meat. Once lit in the chimney lighter, spread the coals all to one side of the Weber – that’s going to be the direct heat side.

I seared the roasts over direct heat 5-7 mins per side (to a bit of nice char) and then cooked them on the indirect heat side for another 20-25 minutes until they reached an internal temperature of 130 degrees. Once they’re at that temp, wrap them in foil and let them sit for at least 15 minutes to let the juices re-enter the meat. Then slice thinly across the grain and serve – preferably with an nice accompanying BBQ sauce. I had also picked up a jar of Tom Douglas’ Ancho & Molasses Barbecue Sauce this morning at Sunset – and it was a perfect accompaniment to the tri-tip!

We also grilled some veggies to accompany the roasts – including corn on the cob, onions, baby bok choy, zucchini and bell pepper. We cooked the veggies mostly over direct heat – taking care not to let them burn – while the tri-tips were cooking on the other side of the grill.

A great meal and first time BBQ of the season!

If you’re in the Bay Area and have a change to find these Pimientos de Padrón peppers from Happy Quail Farm in East Palo Alto, be sure to pick them up – they’re a great addition to a steak or chicken BBQ.

We found them yesterday at the produce market at Market Hall on College Avenue in the Rockridge district of Oakland. Happy Quail Farms sells at a number of Farmers Markets in the Bay Area as well including the Ferry Plaza Market in San Francisco on Saturdays and Tuesdays and the Sunday morning Menlo Park Farmers Market.

Cooking these lil guys is also super easy: olive oil in a pan, stir until small white blisters appear, sprinkle with coarse salt and serve! Yum! (Beware that “typically one out of about a dozen is mild to scorching hot”!) Our batch yesterday was mild-mannered!

We’re having a struggle this Spring weather-wise – trying to shake off the winter storms and get into the usual – boring – late spring and summer weather in northern California. Today, a blustery set of heavy rain below in – with chilly winds, etc.

Anyway, it was a great day for soup – so we dusted off one of our favorite recipes from last year – Barley Soup With Mushrooms and Microgreens – made mostly with ingredients from our local Trader Joe’s. It’s a tasty and healthy soup that goes just right with days like today.

A few weeks ago, I noted Mark Bittman’s alternative approach to cooking a great tri-tip steak. Tonight, we made Mark’s recipe – with (naturally) our own tweaks. The result – steak and a modified Remesco sauce – was outstanding!

I followed Mark’s recipe with respect to the tri-tip itself – cooking it 5 minutes over very high heat in a cast iron skillet – followed by putting the cast iron skillet into a very hot (450+ degrees) oven for (in our case) about 15 minutes (our oven peaks at 450 – not 500 degrees). The key is watching the tri-tip to reach 125 degrees internal temperature.

The tomatoes went into another pan – along with some slivered almonds, some minced garlic, a healthy amount of olive oil and – a few minutes later – a few tablespoons of sherry wine vinegar. While the tri-tip finished cooking and resting for 5 minutes, the sauce simmered – developing an amazing flavor.

As usual, I sliced the tri-tip against the grain and smothered the slices on the serving plates with the sauce. Wow – what a great combination of flavors! With this technique, I avoided using a food processor and was able to use simpler ingredients (sliced almonds, minced garlic) to produce an amazing result! Thanks to Mark Bittman and his recipe for his suggestions on this Romesco sauce – the flavors are superb – and a great accompaniment to tri-tip!

Our ‘Lazy-S’ Easy Oven-Roasted Tri-Tip recipe is among the most viewed recipes here in Scott’s Kitchen. Tri-tip makes a great meal (and wonderful leftovers for use over salad, on sandwiches, etc.) Depending on the time of year, you can easily oven-roast them or, when it’s BBQ season, cook them on the Weber. Either way, they turn out great!

Here’s a different approach to tri-tip (with a romesco sauce addition) by Mark Bittman who writes The Minimalist column for the New York Times. Bittman’s technique involves pan searing the tri-tip (along with the ingredients for the romesco sauce) in a cast-iron skillet followed by finishing the tri-tip in a 500 degree oven. Here’s his column about tri-tips, his recipe, and a 5-minute video showing him preparing it.

Bittman says that it can be hard to find tri-tips in New York – a problem we certainly don’t have out here in California – where the tri-tip is a very popular cut of beef!

My wife made a wonderful pasta dish for tonight’s New Year’s Eve supper. She made it up as she went along – something she likes to do and is very good at! I tried to capture the process in real-time!

That’s it – a very tasty pasta dish for New Year’s Eve. Serve with a special red wine (we served ours with a wonderful Copain Anderson Valley Pinot Noir that was a Christmas gift from good friends)

Today, for our Christmas dinner 2009, we’ll be cooking a 14-lb Diestel turkey that we’ve dry-brined this week using this recipe from an article in the Los Angeles Times. Dry brining requires thinking ahead – like three days ahead when the turkey needs to be salted and tucked away in the back of the refrigerator.

Friends are bringing a couple of side dishes to have along with the stuffing we’ll be making. Yum! – getting hungry already!

Update: Just a quick note to report that the Christmas turkey turned out to be excellent – moist white meat, great flavor! Our little experiment in dry-brining the holiday bird was a big success! Thanks to Russ Parsons for his article and recipe!