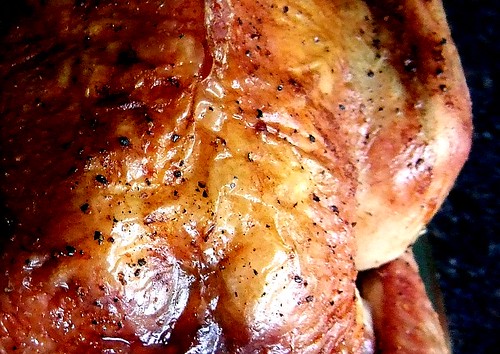 It’s starting to feel a bit like fall here in Menlo Park – which always brings to mind cooking roast chicken in the oven. We’re mostly wintertime roast chicken people – not wanting to bother with it during the summer. But as we get into the fall season, and the days cool off, roast chicken comes to mind as one of our weekend dinners.

I recently came across this simple roast chicken recipe from Mark Bittman. Click through for the recipe and also a link to one of his Minimalist videos where he shows the technique.

It’s a really simple recipe. His key breakthrough was discovering that the use of a cast iron skillet for roasting the chicken helped balance having the white/dark meat cooking appropriately. He recommends putting the skillet into the oven when you first turn it on – and use a high heat (he suggests 500 degrees which our oven won’t quite reach!). As the oven warms, the skillet warms up with it – so that when the chicken is put into the skillet to cook, the warm skillet will help the thighs and dark meat cook a bit faster while letting the breast meat cook normally. It’s this orchestrated imbalance that provides the magic to his recipe.

Give it a try for one of your weekend dinners!

This site uses Akismet to reduce spam. Learn how your comment data is processed.